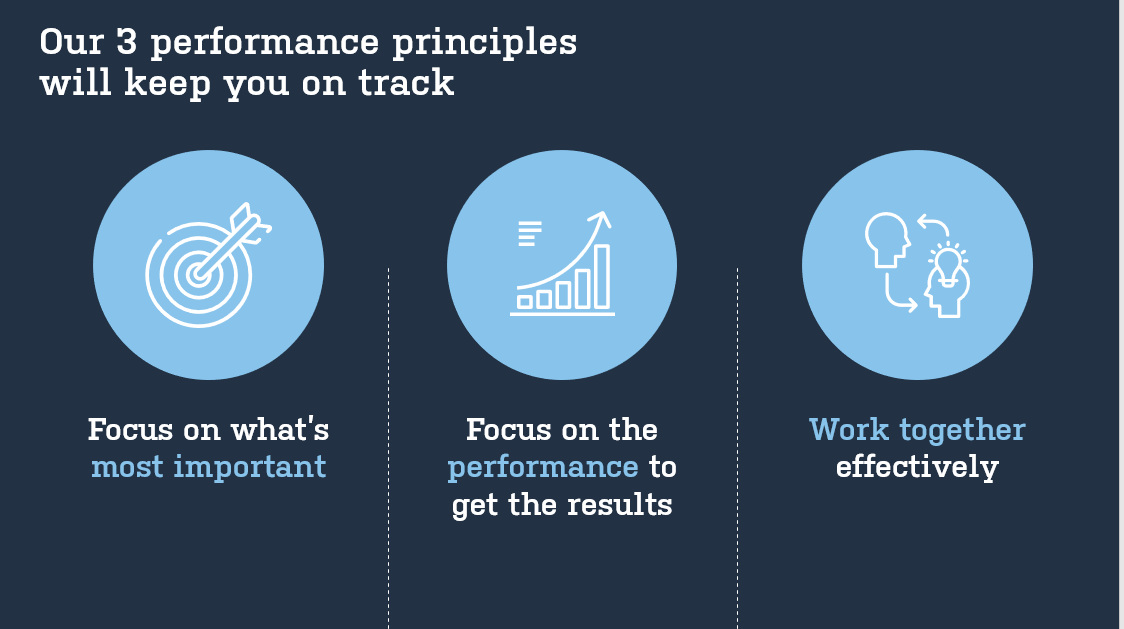 In our last Performance Insight, we asserted that a Crazy Goal is a statement of intent that helps leaders to inspire their managers, and managers to motivate their teams. A Crazy Goal is the light at the end of the tunnel that helps you to focus on the things that are most important. However, simply having a goal does not guarantee you will get the result you want. In this article we look at the second performance principle, focus on performance to get results.

Prioritise Performance to get results

To achieve your Crazy Goal, focus on identifying and prioritising the performance variables that are the most effective in driving progress in your organisation.

Professional athletes always want to improve and typically spend hours reviewing videos of their previous performances. They analyse what went well, and what didn’t, looking for aspects of their performance that they are able to improve. The best athletes don’t dwell on the result for too long. To them, a result is in the past as soon as it has happened.

In his book, Will It Make The Boat Go Faster?, Ben Hunt-Davis tells the story of how their coach Martin instilled a focus on performance within the crew. They worked on achieving the most economical rhythm of rowing they could. In order to do this they ruthlessly reviewed what affected boat speed, down to the level of hand positioning, squaring speed and even speed of connection with the water; everything they focussed on was aimed at increasing boat speed and ultimately performance. They knew that this was crucial in giving them the best chance of the outcome they wanted- the Gold Medal at the Sydney Olympics.

“Your best chance of getting great results is to stop focusing on the results. Instead, focus on the process that will get you the result”. Ben Hunt-Davis

In the typical office environment, it can be difficult to get such granular feedback. Researchers are beginning to use different methods to gain an understanding of how businesses can analyse their data to serve as their “video replays” of performance.

One such solution was explored by MIT research scientist Peter Gloor in his paper “The Impact of Virtual Mirroring on Customer Satisfaction”. By conducting analysis on one company’s (Genpact) communications with their clients, they aimed to gain insight into what patterns and behaviours affect client satisfaction. The end goal was to use these insights to coach employees on more effective communications using “Virtual Mirroring” sessions. Virtual mirroring gives individuals the opportunity to reflect on their own communication behaviours by playing back to them what they did in certain situations and what effect it had.

At four points during the study, researchers compiled and analysed two months’ worth of client e-mail interactions. Over the course of two years, they examined more than 4.5 million messages. E-mails were gathered at the same time as the firm’s semi-annual customer satisfaction survey, which produced a Net Promoter Score (NPS) letting them know how happy each client was with the service they had received.

The research found that simplicity of language in the subject line, fast response times and consistent points of contact would receive higher client NPS scores than their counterparts. However, most importantly, the researchers found that when they actively used the findings to coach employees, they were given a practical way to improve in their work. Over the course of the study, the 26 teams that participated in the coaching sessions saw client satisfaction rise by an average of 17% more than those in a control group (150 teams where no coaching was given).

As such, Genpact were able to learn what variables drive their best performance. Once they had identified these, they were able to prioritise action on changing the way they work across the organisation in order to replicate that best practice. By studying their performances they were able to improve their processes, enabling Genpact to get better results with their clients.

There were hundreds of variables that were in Ben and the crew’s power to change. However, on race-day they couldn’t affect how fast the Romanians or Aussie’s were going to row, nor could they control the weather conditions. To an extent, their competition and the conditions in which they had to perform were unpredictable. They had to focus on the factors they could control to give them the best chance of achieving their Crazy Goal- the crew called this “controlling the controllables”.

The same goes for the business arena. There may be a new rival competing for your market share, or there may be a change in your customer’s needs– the competition and conditions are unpredictable. By focusing on the performance factors that are within your control- the processes, people, systems and infrastructure- you will be better equipped to navigate any unpredictable conditions and maximise your chances of reaching your Crazy Goal in spite of them.

Research reinforces that this is achievable by instilling a growth mindset across your organisation.

McKinsey’s Rodrigo Gazzo and Christian Johnson analysed the success of Banco de Credito Del Peru (BCP- Peru’s oldest and largest bank) in challenging the culture to go from good to great. Bernardo Sambra, the HR leader who drove the change, describes how in 2009 BCP were doing well. They were leading in a range of sectors, maintaining good profits and hiring good people. But they felt they could be doing more with the resources they had and saw a gap in their efficiency, especially when looking at their competitors.

Aiming to make a push to improve performance across the business, BCP carried out workshops with 350 leaders. Overarchingly, this was to drive culture change and to encourage people to make decisions that would benefit the bank as a whole. To support this shift, they designed three workshops with these focuses:

⋅ Improved collaboration across business functions (IT and operations, product portfolio, and commercial)
⋅ Strategy-led change management and decision making
⋅ Cost-consciousness and management ownership- treating budgets like you would your own money

Sambra describes how these workshops were the catalyst BCP needed. In the following years, they actioned many changes across the above areas of focus. Crucially, they set up a new efficiency division- responsible for asking difficult questions for new ideas. For each new project, product or function, the budget-holder would have to justify and explain their spending and how it linked back to the bank’s vision.

This not only challenged operational spending but encouraged strategy-focused decisions. While it took time to transform processes across every function, from 2011-13, their cost-income ratio fell from 49 to 41 (significantly, employee engagement also gradually rose  throughout the period of 2011-2015). If it wasn’t linking to the vision, then they decided they should not be doing it.

Instead of focusing on the unpredictable conditions of the market, BCP identified what they could do to perform better. They reviewed where they could go from good to great and improve those areas to drive the result they wanted. Finding a way to get managers owning their spheres of influence ensured that the business was controlling their controllables. By instilling a performance mindset throughout their organisation, they were able to get managers on board and making decisions against what would prioritise progress towards their own version of a Crazy Goal.

In our last two performance Insights we’ve explored two out of three of our Performance Principles, next month we’ll look at the final one, work together effectively. To receive that article straight to your inbox sign up to our performance insights below.

Will It Make the Boat Go Faster? Magazine

Beliefs: The wheels on the bus go round and round

Bouncebackability – Motivate yourself to come back stronger

The latest thinking from the world of sport and business on performance, leadership and teamwork

We love helping our clients to focus differently, imaginatively, adventurously, habitually, every day, on what matters for the best possible results. Our Performance Insights will keep you up-to-date with the latest performance news, information & facts.